In this paper we describe a method for automated detection of suitable  terrains for foot orienteering based on geomorphology and land cover. Existing orienteering maps in Croatia and Slovenia were used as reference data to define criteria for geomorphology and land cover used for GIS analysis. Geomorphology parameters, slope and aspect, were derived from EUDEM digital elevation model. These two parameters define components of direction of surface normal. Land cover criteria were applied using CORINE land cover data set. Analyzed area includes Slovenia, Croatia, Bosnia and Herzegovina and parts of neighboring countries.

While there are numerous methodologies and approaches which could be used for detection of suitable terrains for orienteering running, we decided to use very simple method. Existence of reference areas, from which criteria can be defined and applied to the rest of area, simplifies the procedure and enables evaluation of results. Method is straightforward, thus can be performed using standard GIS with basic raster algorithms.
Selected criteria of slope, aspect and land cover could be related to quality of orienteering terrain in the following manner:

First, the data was prepared for analysis. Selected coordinate system was EPSG:3035, Lambert equal area azimuthal projection for Europe. Resolution of raster data was 25 m. EUDEM was downloaded and clipped to area of interest. CORINE data set was projected and converted to raster. Areas of existing orienteering maps and terrains obtained as vector polygons were also projected and rasterized, creating mask of reference areas. From EUDEM, slope and aspect rasters were calculated.

This type of analysis depends on data resolution. One way to produce more valuable result is to test different resolutions and discover its impact. For this paper we used another approach. Assuming that higher resolutions would yield even better results, we used highest available resolution which is 25 m. Instead of doing pixel-by-pixel based comparison, to obtain better results we have used statistics for certain neighboring area of pixel as input data for analysis. The diameter of circular area is 15 pixels (375 m) and is selected to cover typical length of leg between two control points in foot orienteering which is estimated to be between 200 and 400 m. 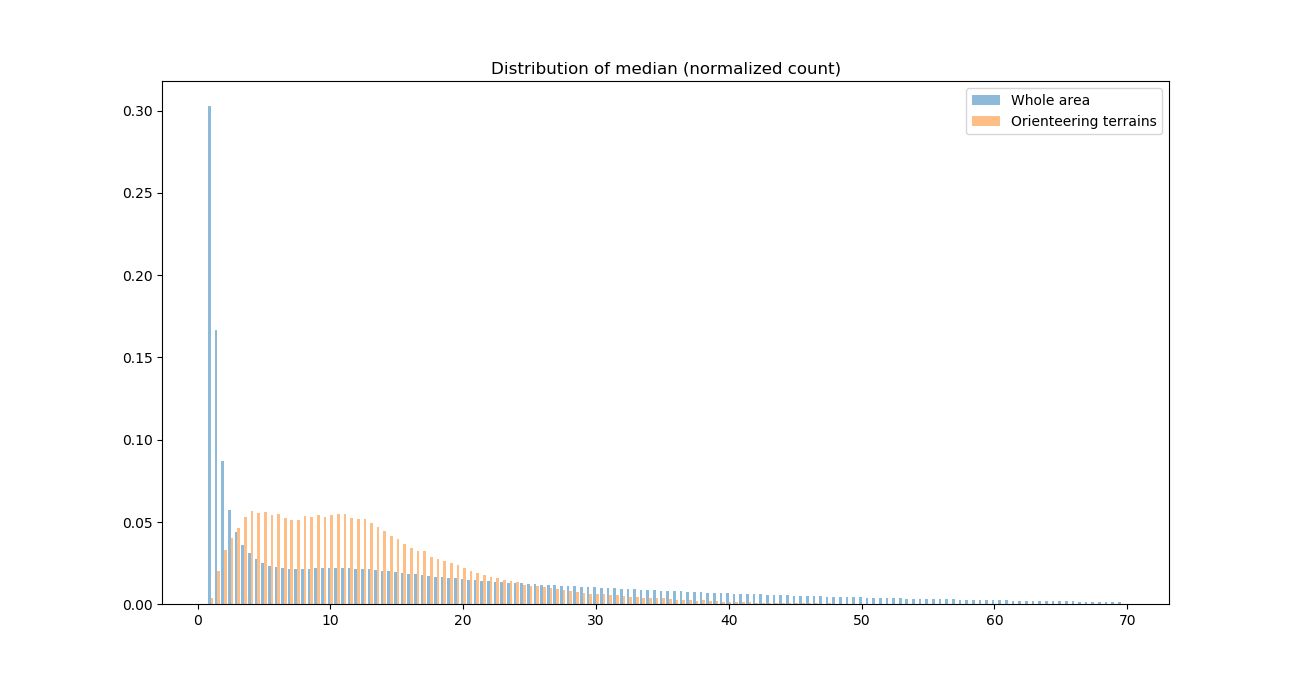 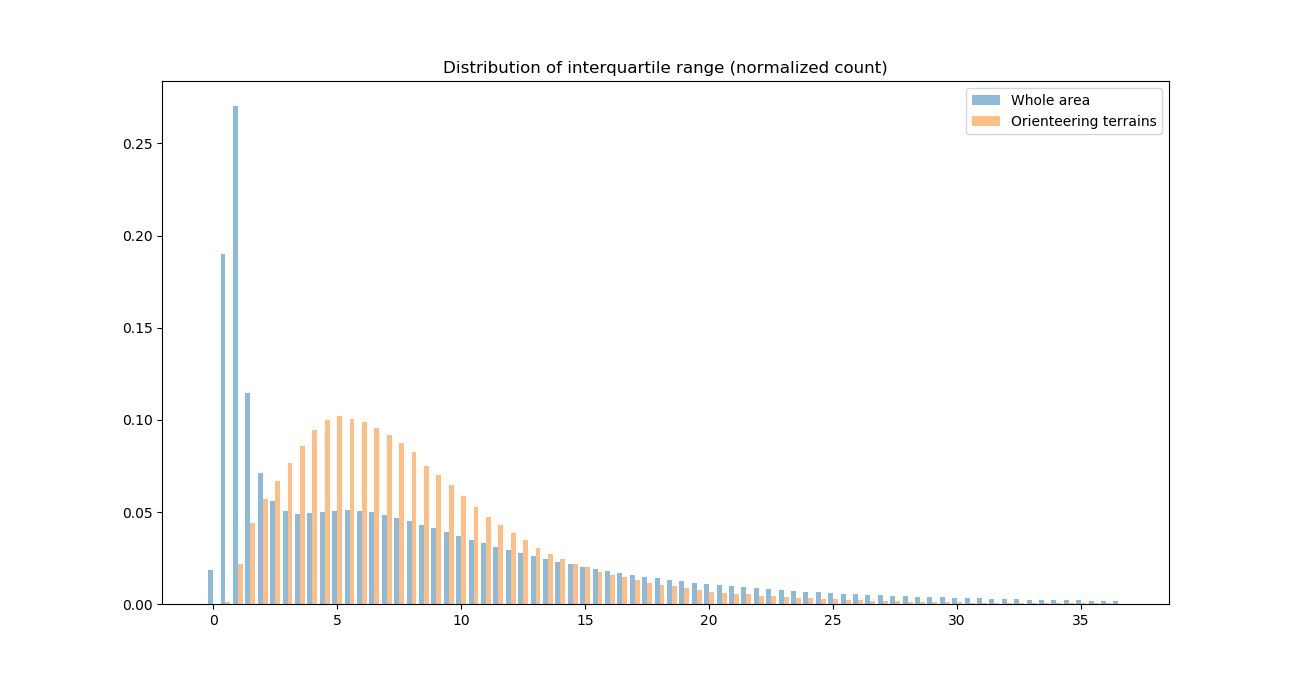 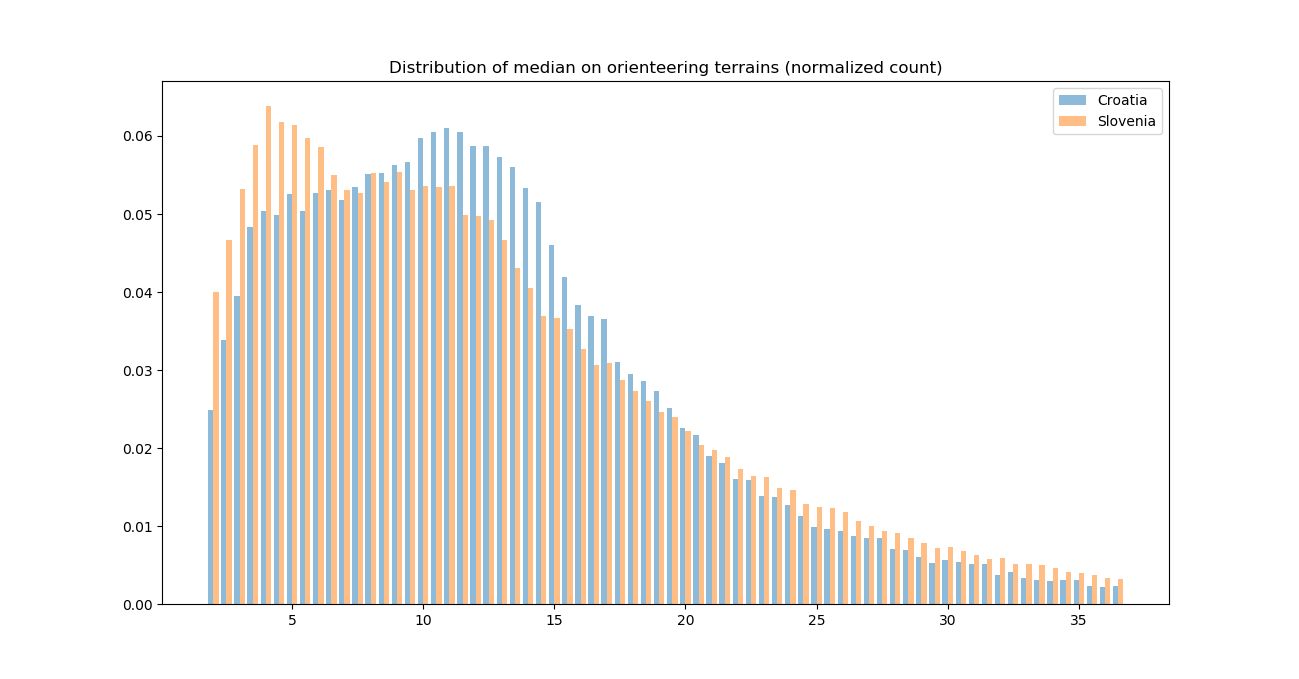 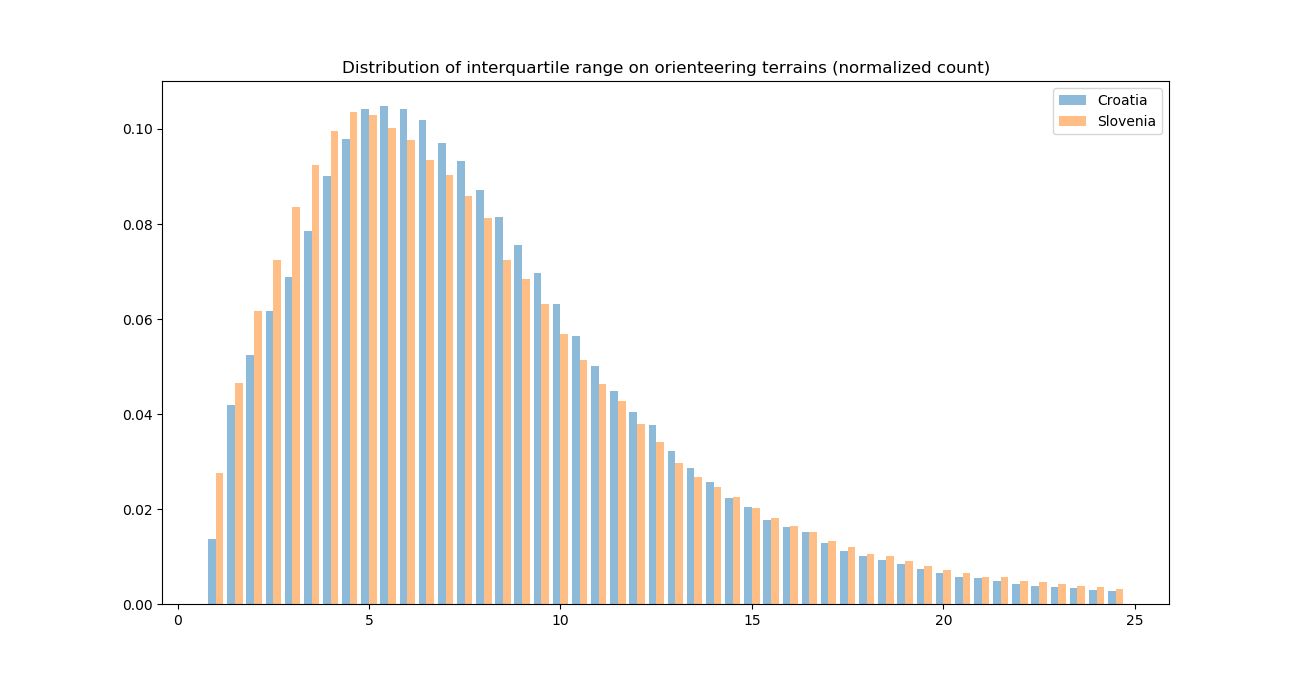 After that being done, the histograms for median of aspect diversity were calculated, for the whole area and area under existing orienteering terrains. 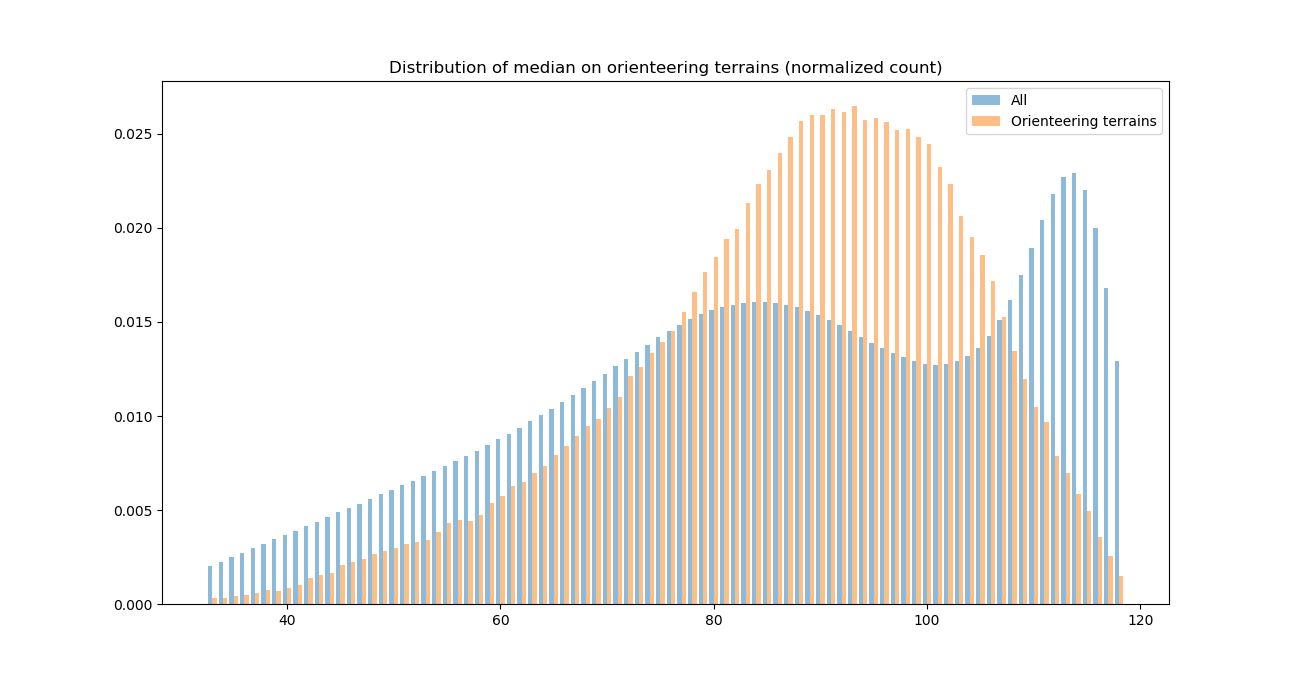 Question that can be posed here is whether is necessary to limit aspect diversity to upper bound. Flat areas are already filtered by slope parameter, and very high aspect diversity should not be an obstacle for orienteering terrain. This question is to be answered in future work.

Areas filtered by aspect diversity criteria. Big slopes of even aspect and flat areas are excluded. 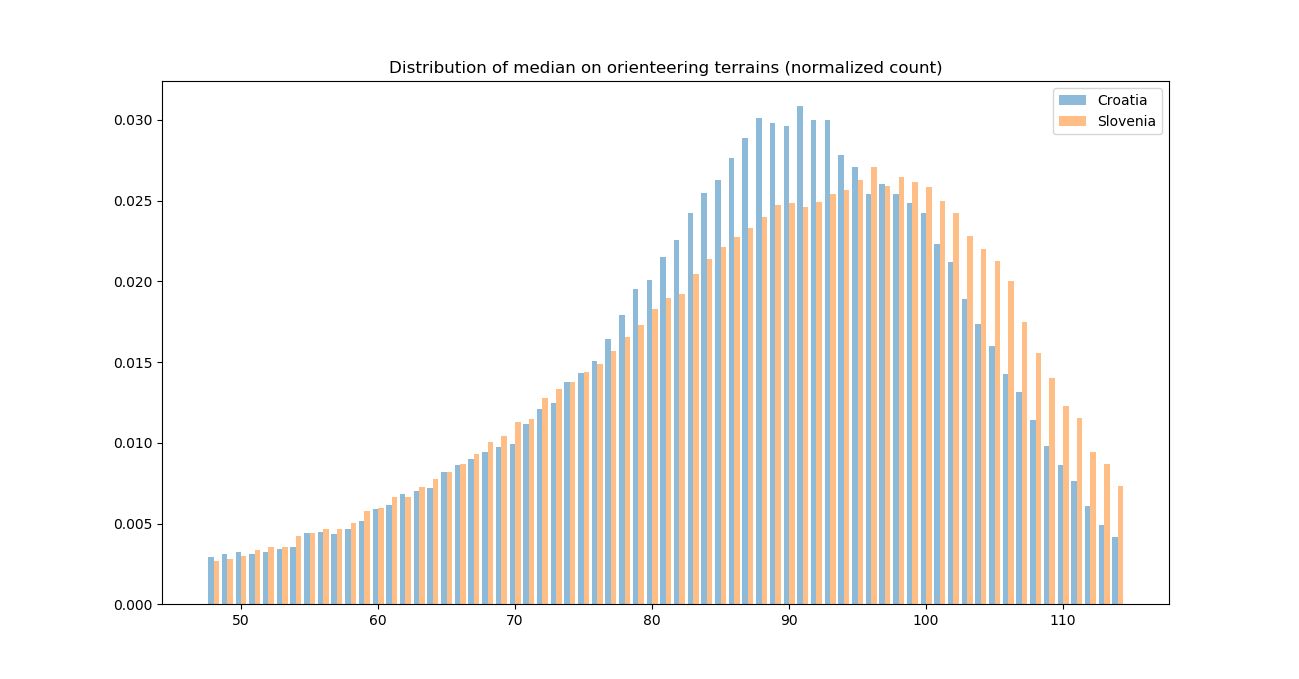 Land cover data in CORINE data set is in nominal scale (distinct land cover classes) and analysis is performed on original data, without using neighborhood operator. Histograms for the whole area and orienteering terrains reveal that forests are the most frequent choice for orienteering terrains (classes 23-Broad-leaved forest, 24-Coniferous forest and 25-Mixed forest). Classes that cover up to 10% of orienteering areas, each, are 20-Complex cultivation patterns and 21-Land principally occupied by agriculture, with significant areas of natural vegetation. Smaller ratio of up to 3% each
is found under classes 2-Discontinuous urban fabric, 18-Pastures, 26-Natural grasslands and 29-Transitional woodland-shrub. From further analysis 2-Discontinuous urban fabric was omitted since this analysis is for foot orienteering and not for sprint orienteering which is usually organized in
urban areas. Existing orienteering maps can have small portion of urban areas that are close to main terrains and that is the probable reason for this appearance (additionally some reference areas are also used as sprint orienteering terrains). 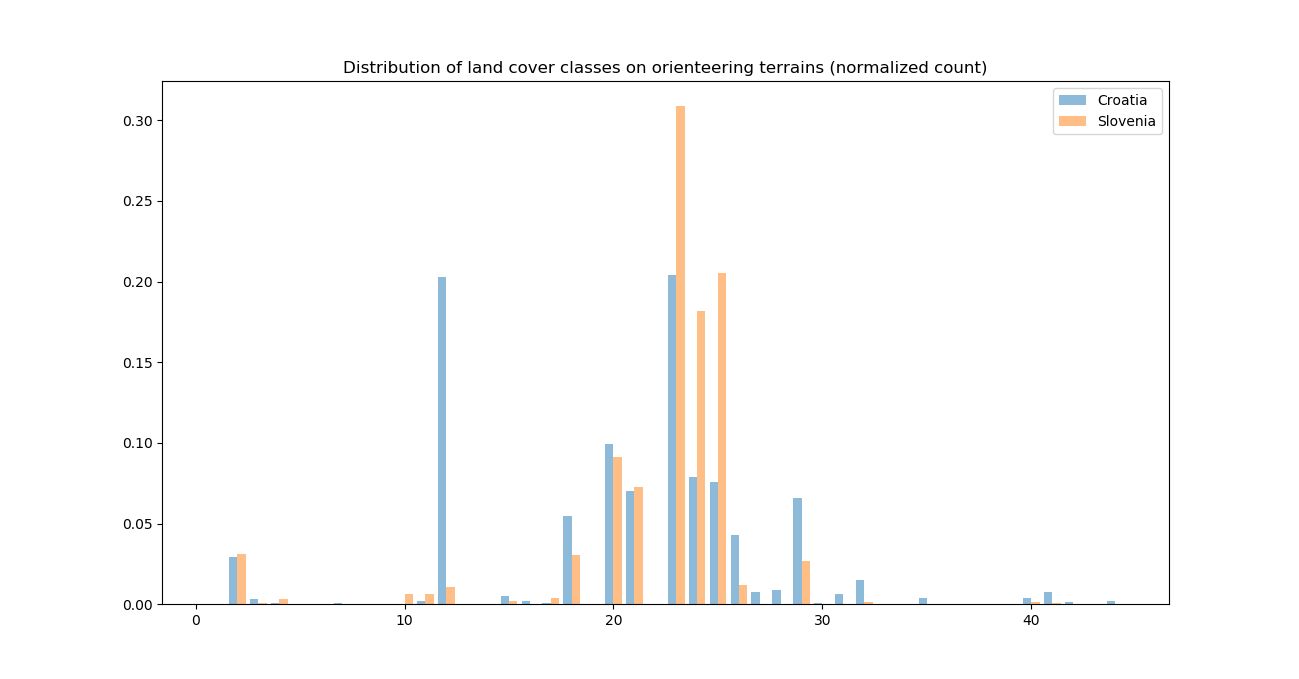 Comparison of land cover for Croatian and Slovenian orienteering terrains shows that broad-leaved forest prevail in Croatia, while in Slovenia most occurring land cover is coniferous and mixed forests. 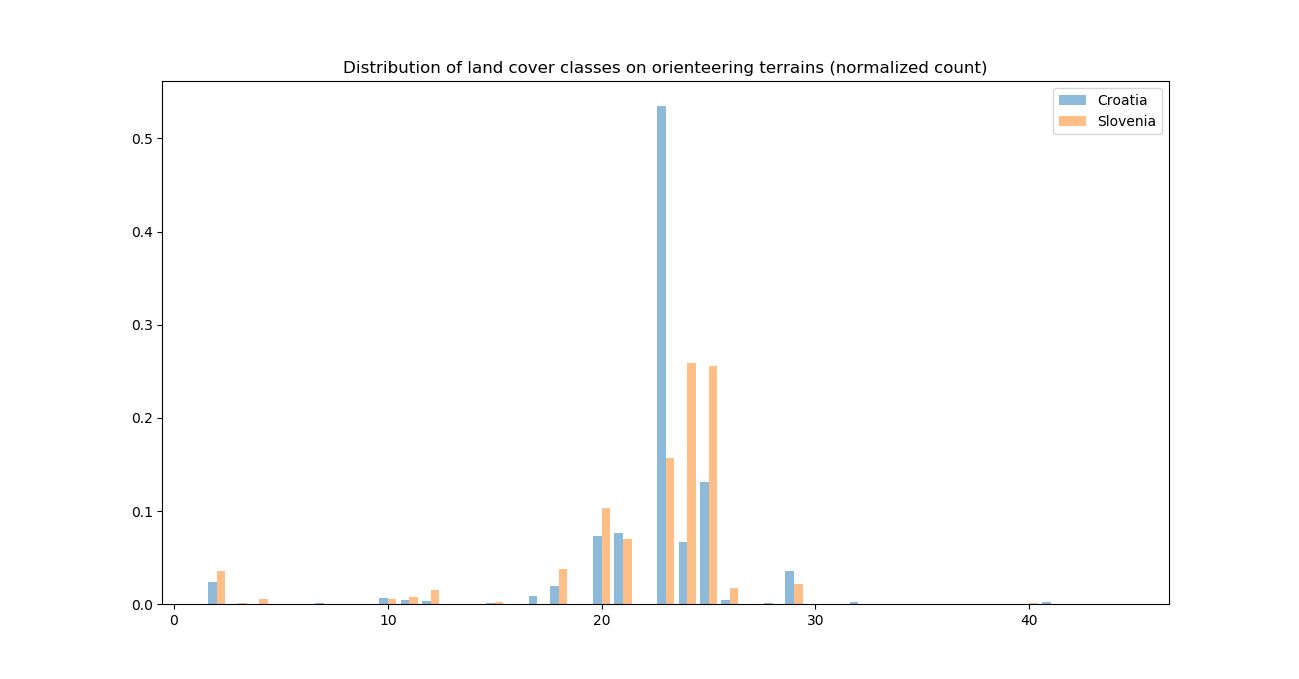 Areas that are potentially suitable for orienteering are given as overlay of three maps (filtered by slope, aspect and land cover criteria) using logical AND operator. Result contains small holes and speckles which affect presentation quality of result.

To improve presentation quality of the result, hole filling was performed for holes of area less than 40000 m2 (200×200 m). Such small patches that appears as not suitable for orienteering can be avoided with careful course planning, if necessary. Finally, selected areas that were less than 0.25
km2 were deleted since very small areas are not allowing for proper course lengths.

Final step in analysis includes addition of quality information to selected areas. This was achieved by setting arbitrary rules that can indicate quality as follows:

Using data on existing orienteering terrains gives us opportunity to do some evaluation of selected potentially suitable areas. This will be done in future work.

In order to publish and give access to results, final map will be published under CC-BY-SA license using suitable spatial web service. This will enable further evaluation by orienteering experts and field checks.