Sources of spatial data on Croatian mountains that are usable in GIS and mapping applications are sparse and their quality varies. The only national open spatial data source is the Gazetteer of Geographical Names published and maintained by the State Geodetic Administration (SGA) of the Republic of Croatia. Among geographical names of many feature types, it also contains names of mountains, hills, peaks, parts of mountains and hills, etc., which are structured as points with attribute data. Useful additional global open data sources include GeoNames and OpenStreetMap.

Using point data to represent areal geographical features is common in geospatial applications because it can lead to more efficient data processing and maintenance. But, for some purposes it also has drawbacks due to loss of geometrical details and information, such as when placing names (labels) of areal features on maps. Various algorithms for automated name placement of areal features are implemented in current GIS and mapping software. The input data for such algorithms are polygons with attached attribute data including names. This means that for both automated and manual placement of mountain names, polygons that represent their extents are required.

The definition and delineation of mountains depends on the application purpose, including agricultural subsidizing, statistical data collection and analysis (Price et al., 2004), hydrology (Viviroli and Weingartner, 2004), biogeography (Körner et al., 2017), etc. The problem of modelling and delineating areal physiographic features for the purpose of their naming on maps was also investigated. Buckley and Frye (2006) concluded that polygon geometry provides a multi-purpose and multi-scale model in GIS databases for labelling most physiographic features, with the exception of points that represent solitary peaks. They also discussed two methods of capturing geometry: the first, which they preferred, was manual digitizing from maps, and the second was automated feature extraction based on a DEM.

This research aims to propose a new methodology for delineating mountains using DEM analysis. The main objective is to create a dataset for placing names on the maps, but it could also serve in other applications where named entities require precise bounding limits. After landforms are automatically delineated from the surrounding land, the next required input is point data representing mountain peaks. Automated selection of peaks above a certain height is also possible and can be used to test consistency. Peaks are then used to filter mountain landforms. Lists of Croatian mountains are available from these sources: the SGA’s Gazetteer of Geographical Names (45 features) (URL 1), the Statistical Yearbook of the Republic of Croatia 2017 (46 features) (URL 2) and on web-pages of Croatian Mountaineering Association (descriptive data and geographic coordinates) (URL 3). There are significant differences in these datasets.

In the first step, the methodology uses a DEM to identify areas of inverted terrain that represent natural breaks between mountains. Specifically, after identification of inverted terrain, flooding analysis is performed starting from the bottom, raising the “water” level up to the threshold where it flows downwards outside of the terrain area. On a typical DEM, this analysis results in naturally closed valleys. On an inverted DEM, the same analysis results in naturally closed mountains. This is a straightforward analysis that does not depend on any input parameter except for the DEM. The only concern is that the DEM must be expansive enough to ensure that it completely covers the area of interest. We accomplished this first step using GRASS GIS module r.terraflow. The resulting vector polygons for Croatia are shown in Fig 1. Most of the polygons represent multiple mountains, but there are some that only represent one prominent mountain (Fig 2.). 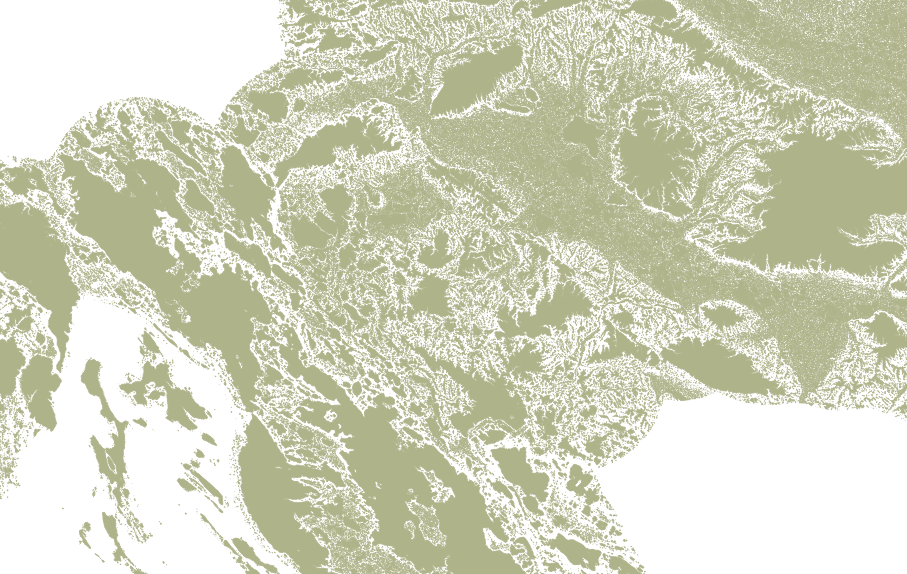 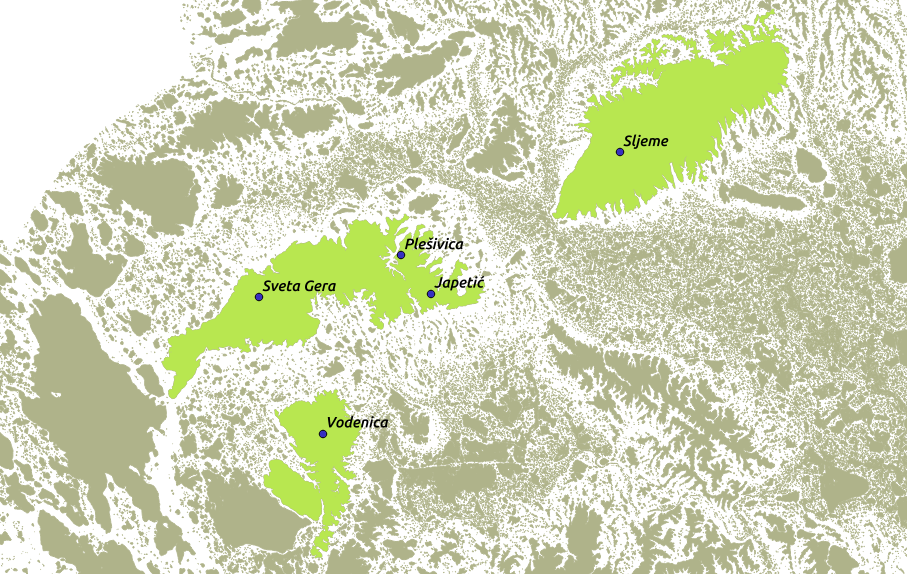 The next step is the selection of vector polygons obtained from the DEM data that represent Croatian mountains. This step does not have a unique solution because the results depend on how one defines “Croatian mountains”. Possible defining citeria include peak elevation, slope, mountain area, climate, administrative criteria, or common knowledge. Whatever criterion is used (in our case we used mountains listed in the 2017 Statistical Yearbook of the Republic of Croatia), for each included mountain the highest peak can be selected as a representative point. By overlaying these points and polygons from the previous step we obtained a set of polygons for selecting mountains (Fig 2, green polygons).

In order to get a single polygon for each mountain, we had to delineate polygons that contained two or more listed mountain peaks. For this final step, we again applied DEM analysis. First, the highest paths connecting peaks (with maximum height of the lowest point on the path) were determined using GRASS GIS (command r.walk and r.drain). The lowest point on that path was selected (it was usually a saddle) and then, from that point downward, flow paths were calculated. These paths were used as delineation boundaries (Fig. 3). The final result depends on selected peaks because this delineation is done only between pairs of selected peaks within the same elevated landform. 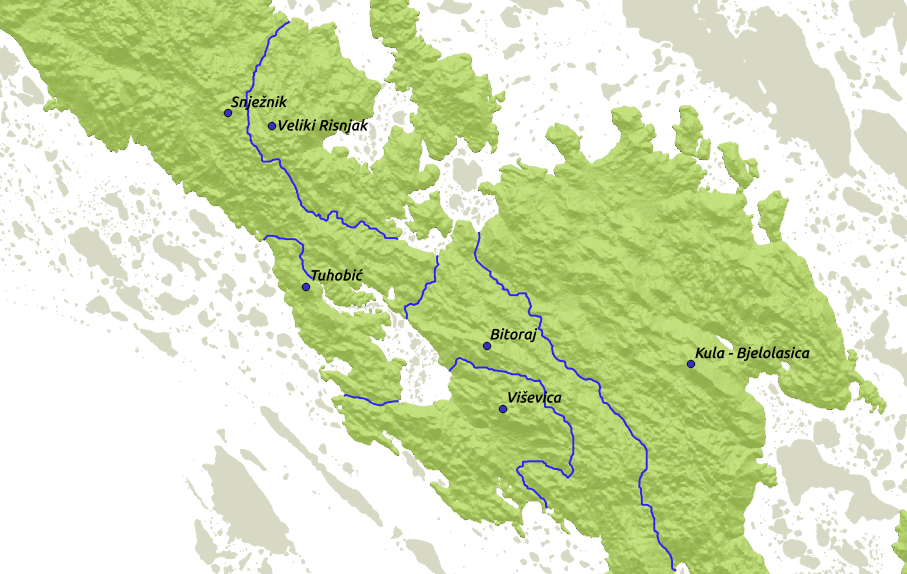 Figure 3. Delineation of landforms using only mountain peaks listed in the
Statistical Yearbook of the Republic of Croatia 2017.

The dataset obtained by the proposed method just described is not enough for the automated placement of mountain landform names. Additional processing is needed (Fig 4.). Some landforms include surrounding hills and other elevated terrain that are unnamed. There are different methods on how to proceed with delineating named mountains, such as including peaks of unnamed hills (the result will depend on which peaks are selected). Using other terrain parameters, such as slope, height, topographic indexes, or even manual methods are additional solutions. The same procedure can be performed on a non-inverted DEM to get similar dataset for closed valleys (e.g. karst topography). 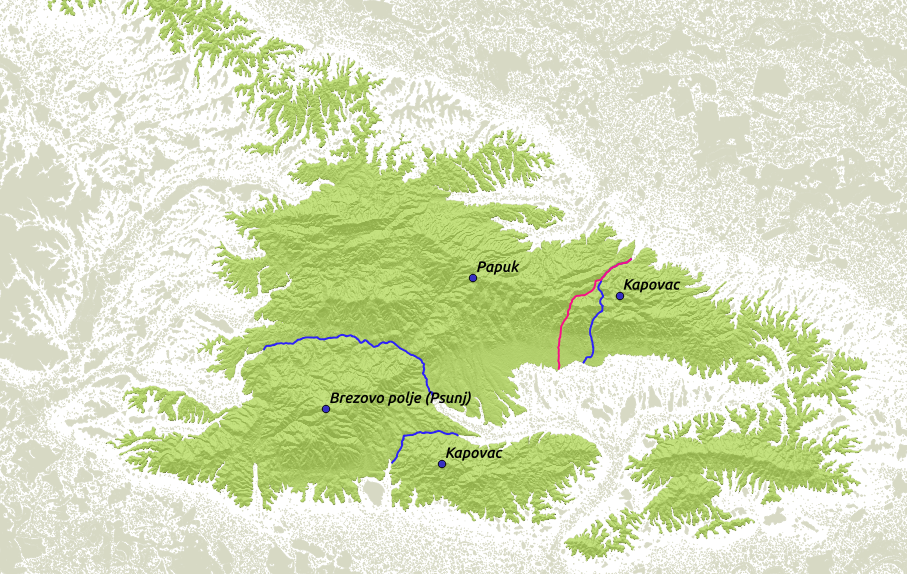 Figure 4. Example where further delineation is required, e.g. Papuk area includes surrounding hills in the west and north that should be excluded. Delineation between Papuk and Kapovac in the east is vague; the blue line was obtained analytically and the purple one from a descriptive boundary.

The delineation of mountains is a problem that does not have a unique solution. In the case of Croatia where mountain delineation does not yet exist, boundaries obtained analytically using only terrain geomorphology can provide an initial dataset. The results of our described method can be further modified by other criteria that can lead to delineations for purposes not considered in this paper. Publishing the results via spatial web services is an option that will ensure greater availability and encourage more people to enhance spatial datasets of Croatian mountains.

Buckley, A. and Frye, C. (2006). A Multi-scale, Multipurpose GIS Data Model to Add Named Features of the Natural Landscape to Maps. Cartographic Perspectives, 55, 34–53.