Mapping the Mountain: The mapping of Mount Ruapehu

Abstract. Ruapehu is arguably the most mapped mountain in New Zealand. In 1887 the first ‘comprehensive’ map covering Mt Ruapehu, and adjacent Ngauruhoe and Tongariro, was published to support a proposal for our first National Park. Subsequent mapping, utilising contemporary cartographic developments (in the widest sense), has continuously redefined our knowledge of the mountain’s geography and geomorphology, and encouraged its use for recreation by city dwellers. As an active volcano some features have changed dramatically – some with devastating consequences. The cartographic presentation of basic mapping, recreational mapping and scientific documentation, is presented as a record and compared, as cartographic visualisation and technologies have developed over 130 years. 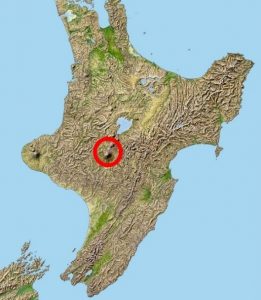 Mount Ruapehu has been the ski playground for both Aucklanders and Wellingtonians since about 1913. It is four to five hours drive from either city. Both refer to it as ‘The Mountain’ – as in, “We are going to the mountain for the weekend”.

The central North Island plateau has been created by volcanism over 250,000 years and earlier eruptions are evident around the massive Taupō caldera, the Rotorua thermal areas, and further north, the active volcano at White Island.

The ongoing activity of this stratovolcano does not deter the skiers and climbers from taking advantage of the opportunities that the elevation of Ruapehu offers.

Ruapehu, the largest active volcano in New Zealand, is the highest point on the North Island and has three major peaks: Tahurangi (2,797m), Te Heuheu (2,755m) and Paretetaitonga (2,751m). The 150m deep, active crater lake between the peaks fills with snow melt between major eruptions which occur about every 50 years. The lake temperature normally varies between 15-45C.

The 1945 eruption emptied Crater Lake and dammed the outlet with tephra. The crater slowly refilled with water, until on 24 December 1953 the tephra dam collapsed causing a lahar in the Whangaehu River which destroyed a railway bridge causing the loss of 151 lives.

There were significant eruptions in 1995 and 1996. On 18 March 2007, the tephra dam which had been holding back the Crater Lake burst, sending a lahar down the mountain. An estimated 1.4 million cubic metres of mud, rock, and water travelled down the Whangaehu river. Ski lodges were evacuated, and access roads closed.

There are fourteen seismic instruments and nine GPS units on the mountain or in the vicinity. The robustness of the natural structures containing the Crater Lake concern scientists, DOC staff and recreation managers, and are continually monitored. Although the basic shape of the mountain is unchanged over recent history, the 14 ‘glaciers’ have shrunk considerably.

The intrinsic dangers on the mountain, in areas sometimes crowded with 10,000 skiers, has necessitated a comprehensive hazard assessment and the development and implementation of comprehensive risk mitigation plans. (Keys 1995. Keys and Green 2007) 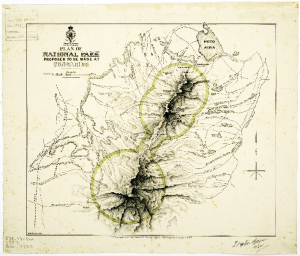 In 1887 a remarkable map was produced to illustrate the proposed Tongariro National Park which resulted from the gifting of the mountains to the people of New Zealand by Paramount Chief Te Heuheu Tukino IV. The map (at 1:126 720 scale) not only shows the context of the proposed park but records the state of geographical knowledge using a rarely seen graphic technique. (Aitken 2014).

The five maps published in 1909, 1917 (2), 1924, and1927, highlighted in red on Appendix 1, have used the same skeletal base information with minor updates, the biggest of which, in 1927, is the addition of the extended Park boundary which is similar to today’s boundary. This edition has many ‘land cover’ notes, and tracks over mountainous terrain that are shown similarly to the main roads. (!)

The recreational and scientific mapping of Mount Ruapehu has been dependent on the national topographic mapping series.

Before 1963, maps of Mount Ruapehu were dependent on cadastral surveys and sketch mapping. This changed when aerial photography, photogrammetry and cartographic scribing were introduced and became standard contributors to national mapping. First, in 1963, was a map at 1:25 000 scale with fifty foot contours. This mapping was later incorporated into the first mile-to-an-inch (1:63 360 100ft contours) map of the area in 1966. This mapping remained the best available until 1982 when it was superseded by 1:50 000 mapping from new photography and published on the recently adopted New Zealand Map Grid Projection. (Jupp 2011). The 1982 mapping has been the definitive source of contours for Mount Ruapehu until their redefinition 35 years later by Horizons Regional Council in 2017. 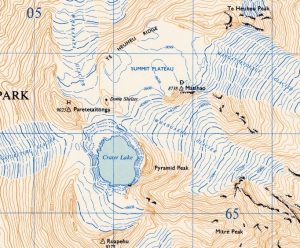 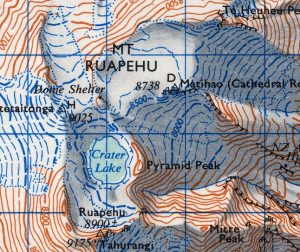 1966 – NZMS1 N122: This sheet was mapped from a range of aerial photography covering a period of 14 years, including the photography used to map the NZMS2 above. Topoplots were produced at 1:15 840, which was the standard mapping scale. This was the best available mapping until 1982.
Published 1:63 360 with 100ft contours.
Second edition 1971, reprinted 1985 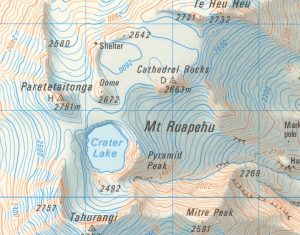 Mount Ruapehu is the highest volcano in Tongariro National Park. Since it was first gazetted in 1883 maps have been made available for both the administration of the Park and for recreational users. As better base mapping became available, and Lands and Survey (L&S) became more capable technically and political motivation increased, L&S produced and published increasingly useful maps of National Parks. At that time all national parks were administered by L&S, so the inspiration, compilation and creation of this series was all in-house. 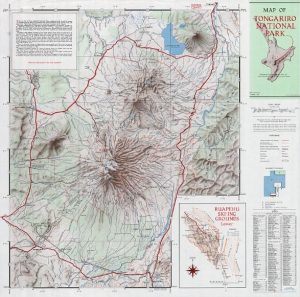 The first real ‘Park Map’ of Ruapehu was NZMS150 Tongariro National Park, published in 1958 with further editions in 1963, 1969, and 1973. This hand drawn map was at a scale of 1:80 000 with descriptive text on the reverse. The first edition featured a hand drawn relief shading in a striking brown colour with 250-foot contours on the eastern side of Ruapehu. These contours were created by plane table supplemented by aerial photographs. An enlargement of the lower Whakapapa ski slopes helped identify the positions of the 30-odd ski lodges.

Publication marked a huge step forward in visualisation and execution. 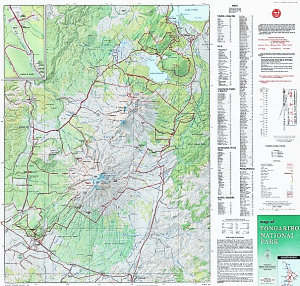 The second edition in 1963 used the same drawings but changed the relief to a neutral grey to reduce conflict with other map components. Reference is made on the map to NZMS221 Ruapehu Ski Fields and NZMS186 Walks in the Chateau Area which were separate publications. The 1969 and 1973 editions were very similar in content and presentation. No effort was made to incorporate the larger scale map data that became available in 1966. The editions of this map are highlighted in Appendix 1 in green.

With the availability of mile-to-an-inch mapping, a more comprehensive map was developed to match increased public demand. NZMS273-4 Tongariro National Park was published in 1975 utilising scribing, stripping-film letter-type, and screen tints to produce a more sophisticated appearance. Again, a neutral grey relief was employed, this time supplement by fifty metre contours. The reverse included a 1:20 000 map with 20 metre contours of the top of Ruapehu including all three ski fields. Also included on the reverse were extensive notes on huts and tracks, and an index to names featured on the enlargement. 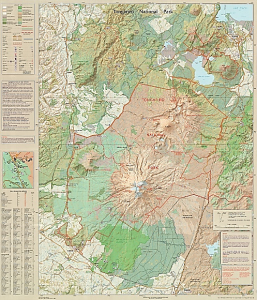 Between 1975 and 2004 eight editions were published of this map. In 1988 the fourth edition sold 8362 copies clearly indicating its success as a public document. The 1980 and 1985 editions were almost identical in content and appearance to the 1975 edition, but in 1987 the contour interval was reduced to 40m on the main map and the scale of the ski fields enlargement increased to 1:12 500 with 20m contours. This larger scale effectively replaced the NZMS221 Ruapehu Ski Fields map which was last published in 1969. Duotone photo-graphs were introduced on the reverse as illustrations.

In 1987 L&S was split, with the mapping functions being part of a more commercially oriented Department of Survey and Land Information (DoSLI).

The 2000 and 2004 editions of NZMS273-4 Tongariro National Park were different. The main map introduced twelve land cover categories to aid botanical interpretation and the reverse of the map included smaller insets of the top of Ruapehu and the Tongariro Alpine Crossing, a comprehensive text, and many coloured photographs. Maps of the ski fields were no longer required.

The politically directed reorganisation of government departments in 1996 led to the demise of DoSLI as a centre of cartographic excellence and forced the Department of Conservation to subcontract the production cartography of National Park mapping to private companies. The 2000 edition to of the Tongariro National Park map was produced by Terralink and the 2004 edition by GeoSmart. The editions of this map are highlighted in Appendix 1 in orange.

Following its experience with DOC’s Tongariro National Park map in 2000, and using staff that were previously employed on this work within DoSLI, Terralink published its own Ruapehu and Tongariro Recreation Areas map in 2002, followed by a second edition in 2004. This map showed recreational thematic information on a 1:50 000 topographic base. The map was double-sided. Some copies were printed on a synthetic paper.

In 2004 NewTopo began publishing mountain maps. An early focus was on the Tongariro National Park with four overlapping maps at scales of 1:30 000, 1:40 000, and 1:60 000. NewTopo’s map of Mount Ruapehu was first published to mark the 8th Mountain Cartography Workshop at Taurewa in 2012. All four maps sell very well indicating a real need and appreciation by the public. The base data for all four maps was derived from the original NZMS260 topographic mapping updated by whatever information is available. 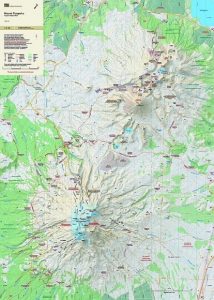 In 2013 Craig Potton Publishing published a suite of maps of DOC’s ‘Great Walks’ with cartography by Geographx. This included a map of the Tongariro Circuit which also covered the Ruapehu Round the Mountain Track. An overview of the Tongariro National Park on an orthographic oblique projection was printed on the back.

In preparation for the 4th edition of the Mount Ruapehu map NewTopo decided to add a composite image of the top of Ruapehu to the back of the map at 1:10 000 scale. Both summer and winter images were available. The summer image was chosen to encourage people to safely climb to the Crater Lake, or beyond to the peaks…

Throughout the 130 years the available information has been well presented exploiting the technologies of the time. Innovation in applying the technologies is evident from the blotchy art technique in 1887, the formal hachures of 1917, the bold relief shading of 1958, and the relatively subtle representations since 1982. Most maps have been strictly topographic though recreation-oriented editions added thematic information and text notes to the face of the map. The exception was the short-lived 2000 and 2004 editions of the Tongariro National Park map which included land cover categories. 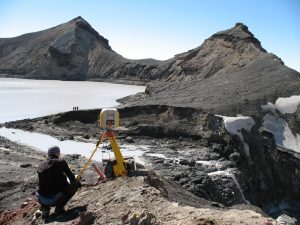 Although the main structure of the mountain is unchanged, the Crater Lake outlet, which is the beginning of the Whangaehu River, has changed several times. Varying lake levels of up to 10m have caused significant lahar flooding down the Whangaehu Valley in the past. The current outlet is over a lip of ‘solid’ rock and may provide a fixed lake level over the next few years.

The mountain is now quite naked as the snow and ice has melted away. The top is now scientifically monitored to give warning of volcanic evens and subsequent lahars which could threaten life and infrastructure. The published mapping for recreation and administration of the National Park can be expected to be maintained, adding to the continuum recorder here.

Map extracts are either from the Cartographic and Geospatial Resources Repository, of Auckland University or the Alexander Turnbull Library, National Library of New Zealand. 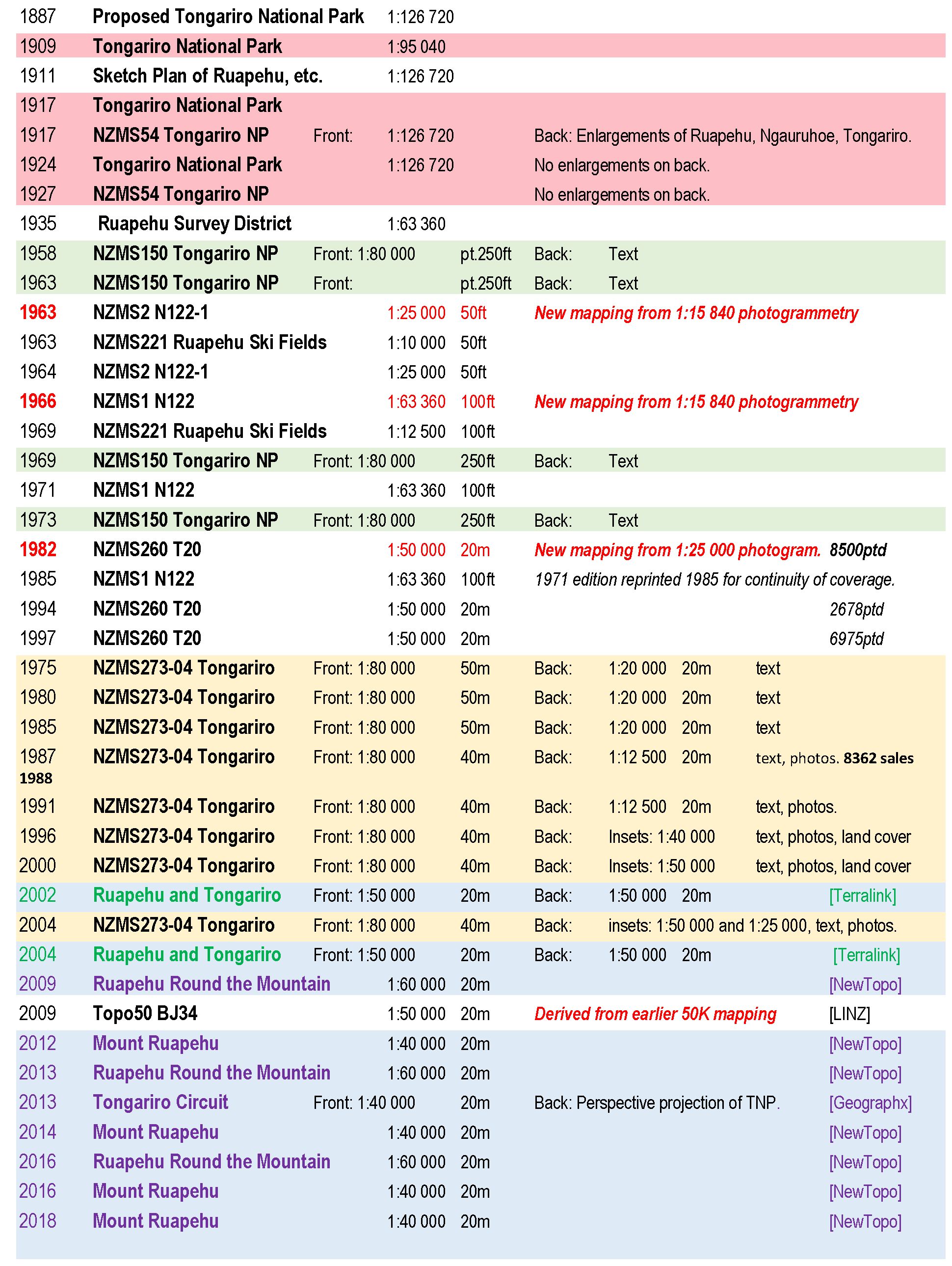 Year and scale of publication. New topographic base mapping shown in red. 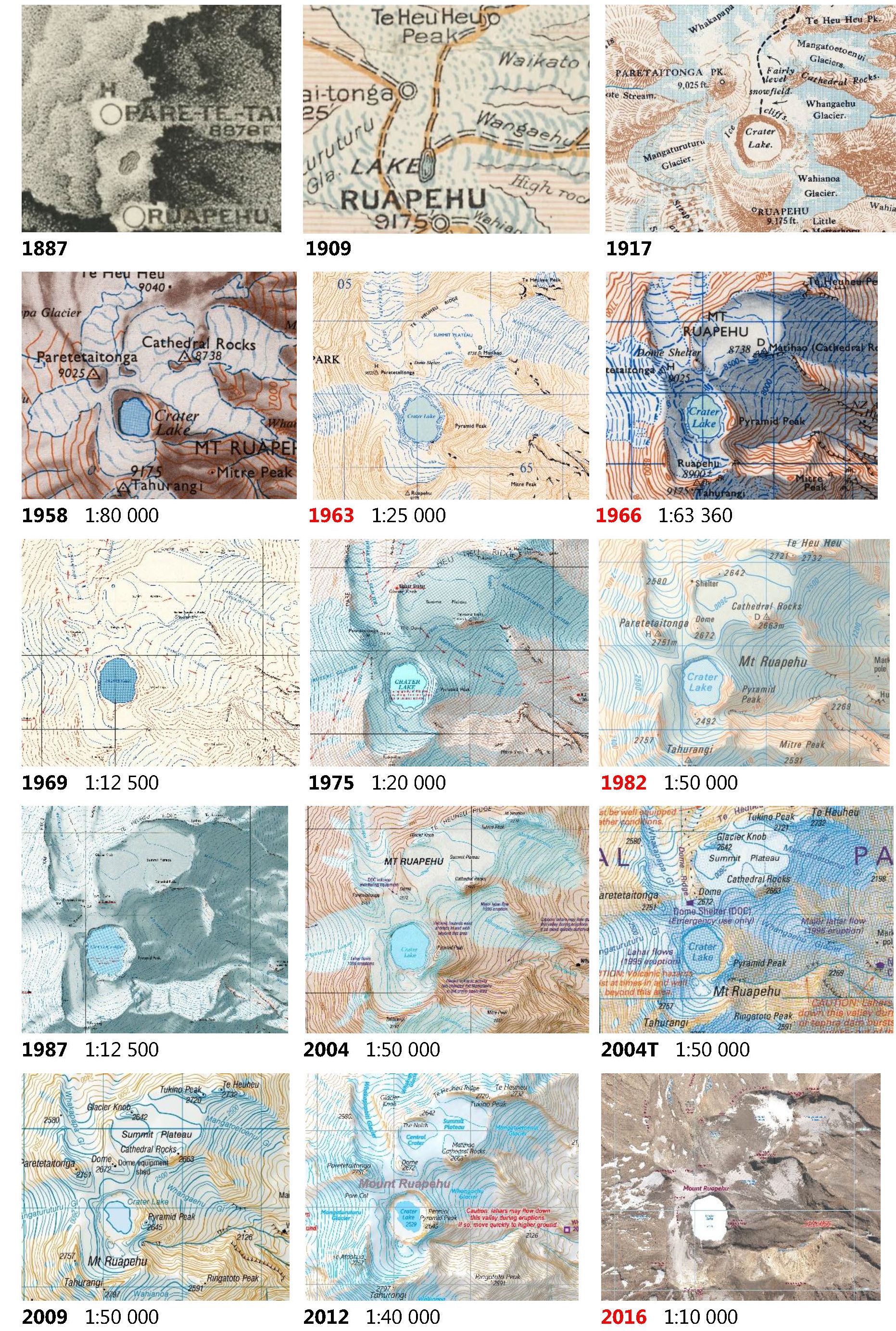